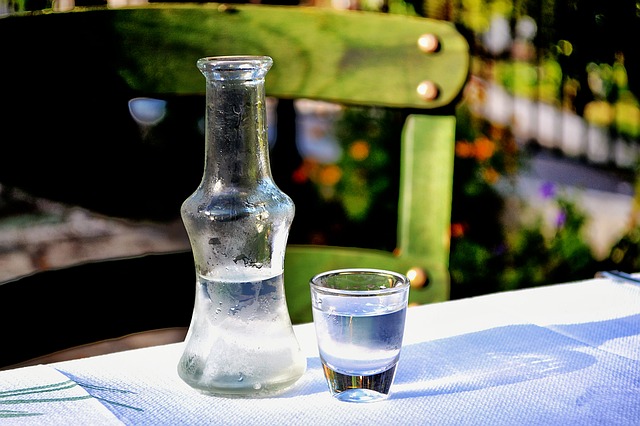 Almost 18 months ago I made the decision to cut back on my drinking.  I didn’t want to give up completely, but I did want to cut back.  Vodka and I had been best friends forever (BFF) for a long time, but it got to the point where I knew that something had to give.  The relationship wasn’t working anymore, it had become toxic. read more

We all have those relationships in our past that make us think WTF, was I drunk the entire time.  Whenever Paul and I are having a bit of rough patch, I go and Facebook stalk one ex, lets call him Dick, just to remind myself where I could be.  It certainly helps bring me back to reality! Dick is six beers short of a six pack..even that is being generous.  I of course claim insanity, alcoholism and any other decision impairing substance for that little blight on my history. Our relationship was short, mostly of me being drunk, him being naive and a relationship that looked more like mother and son to the outsiders.  Someone once remarked to me that if I ever fell pregnant to this guy that she’d hope that it would inherit my brain and not that fathers lack of, so that I could at least have an intelligent conversation with someone.  Our relationship ended when I sobered up a bit and realised what the hell he was really like. Even after we broke up, he kind of hung around for a while.  Like a lost puppy or something.  At the time I was living in hostel like accommodation, with 6 other women.  We were all crackers so it made for an interesting living arrangement, one that always meant someone had alcohol.  One of the ‘rules’ was that there was to be no men staying, a rule we all broke regularly. It was kind of an unwritten rule, you keep quiet, don’t cause a fuss and everyone will turn the blind eye cos they’ve no doubt done worse. One particular day Dick decided to pay me a visit and rode a push bike from his place on the other side of town, to my place…a journey of about 7km.  He put his bike in front of the house, thinking it would be safe inside the yard.  Upon leaving the house again, we discovered his bike was gone. One of the ladies, who I was friendly with was sitting on the steps. I asked her if she had seen what happened to the bike. She took one look at me, and promptly burst out laughing.  She was laughing so hard she had to go and get her asthma inhaler before telling us what had happened to the bike…. It had turned out one of the other ladies had thought some hooligan (the thought of Dick having the forethought to commit a crime still makes me laugh) had pinched a bike and dumped it at our house…so she called the police to have it picked up.  Surprisingly they were pretty prompt and had taken the bike to the police station already.  A phone call to the boys in blue revealed that Dick would have to go down to the station to identify his bike. I decided that I should tag along, you know for shits and giggles. Plus the bottlo was on the way.  There was plenty of giggling the whole walk there, all 12 blocks of it. More from me, less from Dick.  I figured he’d tell them what his bike looked like and be over with it, turned out I was wrong, things were about to get a hell of a lot funnier…well for me anyway.  Well at least after I finished explaining to them that, no I wasn’t there to sign in and doing three times a week was enough thanks folks.  I’m here with this dickhead, seemed to clear it all up though. As the plot thickened, it turned out that the bike was his mates and he couldn’t remember exactly what it looked like. Not one single detail.  Something which I didn’t know until he was asked by the officer in charge.  Long story short, they wouldn’t give him the bike.  Cue more laughter from me.  He then had to ring said mate, who had no idea that Dick had borrowed his brand new bike and tell him that he had to pick his bike up from the police station.  To say his mate wasn’t impressed, was an understatement. All in all it was an afternoon of entertainment still makes me laugh even now, 6 years later. Do you have an ex in your closet that you’d rather forget? Share your stories, make me feel a little better about Dick. Linking up with Essentially Jess for IBOT

I love getting dressed up in costume. No I’m not talking about the bedroom you dirty minded people! I’m talking the kind that you can wear out in public.  Although some girls get the two mixed up.  In the town that I grew up in, Halloween parties were an excuse for everyone to go all out. It was great fun to see everyone dressed up. read more 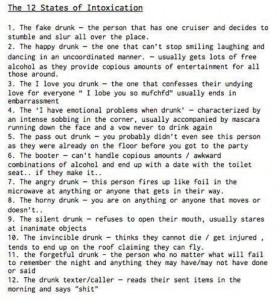 Which one are you?

I signed up for Dry July in a fit of insanity.  So with this weeks Wordless Wednesday I am paying a little tribute to my love.

I need to keep reminding myself of this. Only 28 days to go.

*I received on stubby strip for the purpose of this review.  As always all opinions are my own*

Anyone who has the fortune of following me on twitter knows that I loves the alcohol.  I’m also super lazy so I tend to drink my vodka in premix form.  I am also a bit of a skirt so I don’t like carrying heavy things.  Enter The Stubby Strip. read more