There are so many times I wish that I could go back and say all of the things that I think about now.  It’s the snappy response to an insult.  The words that were on the tip of your tongue until the moment passed.  The words that you know would hurt eventually, even if they gave you a fleeting moment of triumph. 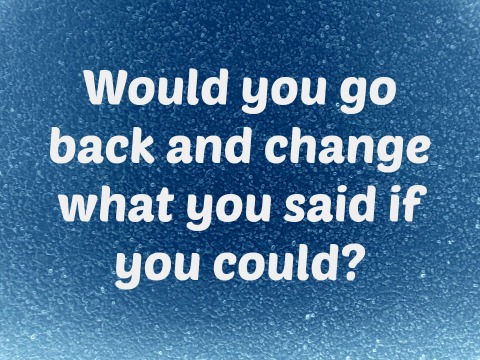 My psychologist says that the reason I carry out these conversations is to help quash the anxiety I feel.  I tell myself that if I prepare these arguments, and think of everything that can be said, then nothing bad will happen.  The world might come crashing down around me.

I also carry out these conversations after I have had the real conversation.  I analyse everything that I have said to death.  Was there something different I could have said?  Did I say something stupid?  OMG they are going to think I’m an idiot.  Just to be clear, this analysis happens regardless of what the topic was, from the weather to a deep and meaningful.

This is why I find it easier to socialise online.  I hide inside my house and comment on status updates, answer messages and send emails.  All safe from the never ending dialogue that runs through my head in real life.  It’s harder to say something completely stupid when you can read your answer before you send it.

Of course the written word isn’t fool proof.  Every one of us brings our own experiences to words, and sometimes a joke hurts.  Looking back at the Facebook status’ of years gone by, I cringe.  I was so young, so ignorant.  At least I have learned different, I have sought out the answers, not always believing the status quo.

I’ve learned that a disagreement doesn’t mean hate, and that it’s possible to disagree with someone and still enjoy their company.  Chatting online has allowed me to feel my way through learning that.  It has helped me to realise that relationships do have areas of grey, that I don’t have to either love or hate someone.

I regret so many things that I have said when I was emotional.  I wish that I could take them all back.  I don’t know if it would make a difference though.  Maybe where I am now was meant to be.  Maybe there is such a thing as fate, and it was inevitable.

Would you go back and say something different if you could?