When someone has a baby, they are diagnosed with cancer or find themselves in hospital for a range of physical illnesses they are sent flowers, the office chips in for a present and get well cards are sent.  I don’t begrudge them receiving gifts, of knowing that people are thinking of them and they care enough to send something.  When someone is in a mental health inpatient ward, the flowers are few and far between, if people even know you are there at all. 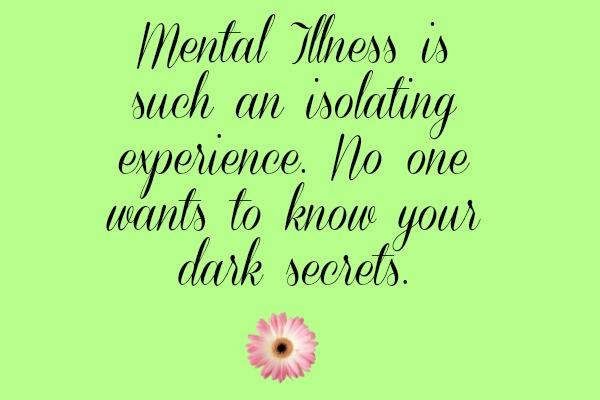 People want to care, I know that they do.  They want to reach out but they don’t know what to do.  Is someone in a mental health inpatient unit sick?  If they are frequent flyers the support starts to wane, people believing that this should be over with now.  The person they know was in hospital, shouldn’t they be better now?  Why do they keep going back?  Are they not doing treatment properly?  My sister’s friend had depression and she’s fine, why aren’t you?

I remember one admission clearly, an admission where I was also referred to a CBT group.  There was a mix of women, diagnoses ranging from depression to anxiety and suicidal ideation being a common theme.  One woman stands out to me, she worked in an office of some description, one that needed a suit.  She was scared that her work would find out where she was.  She didn’t want them knowing that she was in hospital for a mental illness.

That made me the most sad, that here was a woman who for people around her appeared as a smart woman who held her shit together.  Yet she bought into the stigma that surrounded mental illness.  I still remember the stricken look on her face when a nurse told her that her boss was here to see her.  The crestfallen expression at being found out, like she was a criminal not someone unwell.  Her boss understood, flowers were sent and extra time off given.  That is one of the happy stories.

People give up when you don’t comply to their versions of what treatment should look like. I  often wonder if social media plays a much bigger role in this ‘know what’s best’ attitude.  Everyone is an expert, they’ve all read an article about the miracle cures and wonder why you haven’t tried them too.

I have been dealing with being mentally unwell for 13 years.  I have been in and out of hospital more times than I care to admit, sometimes a place to land for 24 hours and others much longer.  I don’t want pity, I don’t think anyone really wishes for that.  I just wish that we could all feel more comfortable about offering support during a mental health crisis, even if it’s a get well card or just a hand to hold.  It means the world.

Do you know anyone who has spent time in a psychiatric unit?  Do you wish there was more you could do?

If you have been in a unit yourself, what do you wish more people would do?

18 thoughts on “Flowers for everyone”