*I received Bosch DIY tools in order to complete this project.  As always all opinions are my own.*

On the weekend Paul and I got into DIY and built a Box Shelf System.  Luckily I got his help because it turned out the project we had picked from the Bosch website was listed as expert, something which I didn’t notice until we were mid build!

The project started with a trip to Bunnings to get MDF and drill bits to complete the job.  Thankfully Paul knew someone with a circular saw, because the mdf sheets came in small, big, and really big.  Although it took him all day to get 3 pieces cut down…so I’m not sure if it saved us time or not!

After the delay caused by rain and men’s ability to talk for half a day (and they say women can talk the leg off a chair!) we had to spread the project over two days.  So we got up Sunday morning, ready and rearing to go.  Paul measured up the screw holes, and pre-drilled the holes, ready to put the box together.  Paul said that the drill felt light in his hands, which made it easier when having to drill multiple holes. 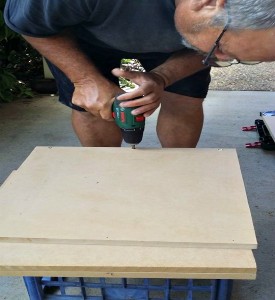 Pro tip, charge the batteries before you start.  There is a little bit of charge on the new tools, but it’s not enough to get you through the whole job.  Thankfully the new Bosch DIY Range have batteries that can be fully charged in as little as an hour.  Fully charged, the batteries last a surprisingly long time.

We set Mr 5 up with the sander (they are seriously that easy to use) when it was on low battery, figuring he could go until it ran out of charge.  He gave up after about 10 minutes but Paul was able to use the battery for another 30 minutes in the sander. 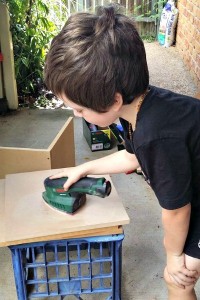 We were half way through the project when Paul realised that we had different size MDF to the one listed in the instructions, so one of the panels was hanging over the edge.  It was all hands on deck to sand the overhang off, but the Bosch Sander did the job easily.

Once all of the sides were put together, we sanded down the surfaces again, ready to be painted.  The plans said that the panels should be painted before the box is put together, but with limited time we decided it was easier to do it the other way around. 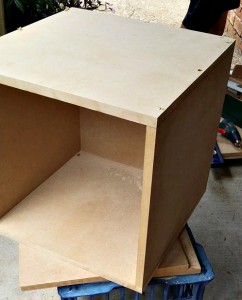 The Bosch Fine Spray System was easy to use and held more than enough product to cover the whole box.  The paint went on evenly but Paul did mention that it was a pain that you couldn’t control the speed the paint came out.  In saying that, as long as you are in a well ventilated area, the spray system works well. 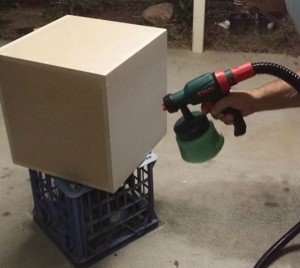 We used a water based primer and eventually paint (we haven’t finished painting it yet, time has gotten away from us!) so that it would be easier to work with.  It took Paul about 15 minutes to mix the paint (you need 10% thinner in order for the paint to go through the nozzle), start up the gun and paint the whole box.  The Bosh Fine Spray System is able to hold up to 600ml of paint (we used about 350 for the inside and outside of the box) and weighs in at under 3kg, making it easy to use.

Cleaning the gun, including the nozzle was as easy as filling the container with water and spraying until it’s empty.  The whole system pulled apart too, so we could run it under the tap.  Paul is hoping to get some coloured paint on to it on the weekend, so keep an eye out of my Instagram for the complete project! 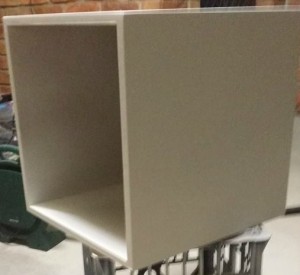 Do you enjoy building things?

I’m painting the box shelf blue, but what colour would you choose?