Yesterday I was scrolling through my Facebook newsfeed when an update from a media call out company caught my eye.  The headline read ‘Australian Company has designed program to cure depression sufferers in under 8 weeks’.  The callout has since been removed from the website but the company is still insisting they can cure depression in under 8 weeks.

Normally, I don’t click on headlines like the one above.  In fact I usually make a point of not clicking on them because they are usually click bait, where the headline has nothing to do with the actual content of the article.  However something (maybe I’m a glutton for punishment) made me click on that link and I was horrified to discover that it wasn’t a click bait headline.  The more I moved through the website, the more horrified I became.

The Awake the Inner Goddess website claims that through their 8 week program, all depressive symptoms will disappear and that the person will then be able to get on with their life.  There are no people involved with the program who have a medical degree or a degree in psychology.  The founder claims that they instead focus on loving the participants.

This statement was taken from the Awaken the Inner Goddess Website

What a kick in the guts it must be for the loved ones of someone who is depressed.  Here is a company that claims that depressed people just need more love.  While I don’t dispute that claim on it’s own, depression is often able to take hold due to the sufferer not feeling that they are loveable (in simple terms).  However not everyone who suffers from depression comes from a family who didn’t love them.  The thing about depression is that it doesn’t discriminate who it takes hold.  You can have all the love in the world and still struggle with depression.

I also worry about the guilt this will induce in the family members and support network of the person with depression.  Especially those who have lost a loved one to suicide.  I can imagine that they already feel that they have failed them, then here is a company willing to tell them that all a depressed person needs is love.

The website claims that they have seen a 100% success rate in curing depression and suicidal thoughts.  When the founder was questioned about these claims and how they deal with those who aren’t cured at the end of the 8 weeks, I was fed a line about the people not being ready to receive their treatment.  She then went on to explain in a long winded comment that they only accept clients to their program who they feel will succeed.  It’s like the private schools who only accept people who are able to obtain A’s.  The data might be correct, but it’s from a deliberately skewed sample. 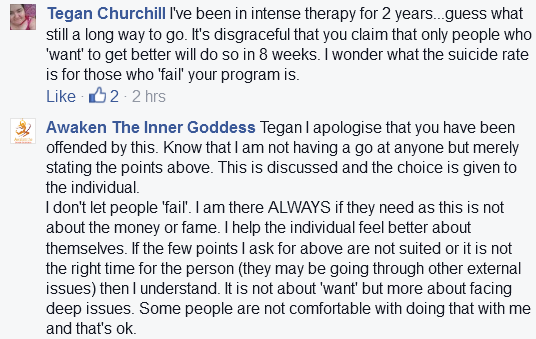 The founder also claimed that their program is intense and that is why it works.  I have been participating in intense therapy for nearly 2 years and we are still uncovering things that are playing a role in my depression.  This isn’t an uncommon occurrence, it’s a bit like weight loss, you can’t expect weight that you have put on over the span of 2 years to fall off in 2 weeks.  It’s just not possible.

I don’t completely dismiss the ability for natural alternatives to help alleviate the symptoms of mental illness.  I published a guest post on the impact of a good diet and exercise and I wouldn’t do that unless I believed in it.  Natural alternatives absolutely have a place in maintaining good mental health.  However the issue that I have with this company is their misleading claims of 100% cures.

I worry that the claims of this company will lead to desperate people feeling worse because they have failed.  I worry about the long term impact these claims have, especially for the people around those who are depressed.  I also worry about the people who have been struggling for years being told by people that it only takes them 8 weeks to ‘get over it’.  There is already enough stigma around the reality of living with depression, we don’t need companies feeding in to this belief.

I don’t hate natural remedies, I am just worried that claims as concrete as the ones offered by this company will lead to more stories like this.

Have you ever tried a self empowerment program?

4 thoughts on “Depression can’t be cured in 8 weeks”