I was going to wait to get this post out, let it sink in a little bit more but I am just so excited that I couldn’t wait to share things with you!  For those who have no idea what I am on about, I was in the audience for ABC’s Q&A when they came to my home town.  One of my readers sent me through the link and when I saw that not only was it going to be in Rockhampton but as part of Mental As week, the topic was going to be about mental illness. 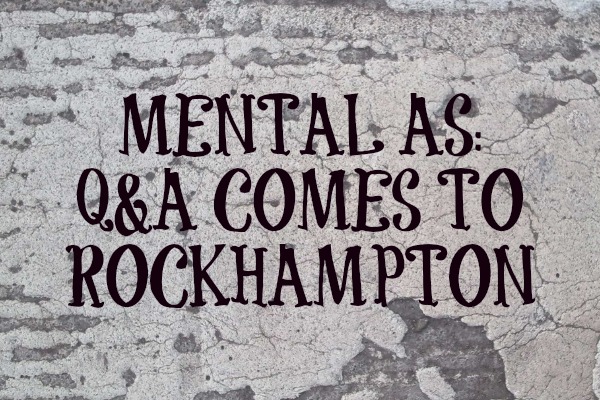 When I first got the email to let me know I was going to be in the audience I was like a teenage girl, there may have been squealing involved.  I quickly got to thinking about what question I would ask if given the opportunity.  It quickly became apparent that one of the things I think is most important, especially during Mental As Week, was about the gap between crisis care and long term treatment.

I wasn’t sure how things would be run on the night, but it became apparent pretty quickly that those who were going to ask questions had already been contacted.  I was a little bummed about it but at least I could relax for the show, knowing that I didn’t have to prepare to ask my question in front of the audience and cameras.

I was equal parts nervous and excited in the lead up to the day, but about 2 hours before we were due to leave, that balance tipped way into the nervous side.  I felt like throwing up, I was snappy and I could see all of my classic anxiety symptoms raring their ugly head.  I felt like I was about to be mental as, and not in a good way.  I skipped dinner, for fear that I would lose it.

In all, I think I went through about 10 outfit changes, something that I very rarely do anymore.  Once I decide on an outfit then I am fine, something that I usually decide on a few days before a major event.  I was stressed and flustered.  I was second guessing even going at all, of course at this stage I also didn’t know that questioners were contacted in advance so I had that looming over me as well.  I wanted my question answered..I just didn’t want to ask it.  However I knew that it was important as a mental health blogger to take things like Mental As with two hands when you are given the opportunity.

By the time I actually got to the theatre my hands were shaking.  I held on to my handbag in the hopes that it wouldn’t show as much.  Thankfully once I sat down I felt so much better.  I was actually a little daring and sat 8 rows from the front.

As for the show, it was just wow.  I loved how it all came together so smoothly, especially with it being live.  There was a great range of questions, with resilience seeming to be a common theme throughout a lot of the answers.  As it turned out, the question I wanted to ask was asked by another woman so I was happy with that.

Surprisingly Bob Katter did say a few things that I really resonated with..right up until the homosexual question.  Watching him be owned by Josh Thomas was by far the highlight of the night.  It was also great to hear from people who are in the trenches with the mentally ill, and what they want to see happen in the future.  I will go deeper into those things in a future post though because there really was a lot of food for thought.  Actually everything in the line up for Mental As will really shine a light on the realities of living with a mental illness.

I really enjoyed being able to be a part of Mental As and Q&A and I was so lucky to be given the chance.  One thing that I will say about the whole thing is that while a lot of what the panel was saying was really great, it once again falls back to the government.  Until the government steps up to the plate then the things covered in Mental As week, will continue.  The stigma might reduce, but the treatment won’t get any better.