*I received Pepsi products for the purpose of this review.  All opinions are my own*

I love going to the beach.  I love that we are only 40km away from the beach.  Even though I don’t drive, it is only a $3 bus ride away.  The beach makes me happy, it makes me feel centred and peaceful.

Paul and I try to regularly take Mr 4 to the beach.  It’s a cheap way to spend the day and it has the added bonus of tiring the sleep dodger out!  I love watching Mr 4 run through the waves and laughing when one crashes over him. 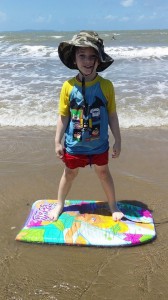 Sometimes we get fish and chips, spread out the paper on the ground and enjoy lunch while we watch the water.  Our favourite fish and chip shop shut down last year and so we haven’t done that in a while which is a shame.  We usually get Maccas on the way home, but it’s just not the same.

We’ve taken our own food in eskys before but it was always a pain trying to lug it down onto the beach.  Especially if we are going fishing too, an esky for the bait and an esky for the food meant multiple trips to the car and it often looked like we were moving to the beach for a week not just the day!  The awesome people from Pepsi sent me a picnic pack including a gorgeous picnic basket and blanket that solved the dramas perfectly. 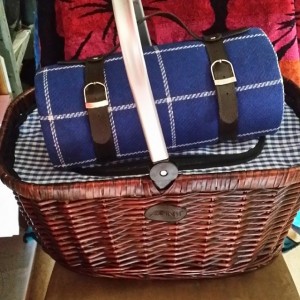 Not only did we get the gorgeous picnic basket and blanket but we also got cans of the new Pepsi Next to try out.  Pepsi Next is boasting that they are the next generation of cola, being the first of it’s kind in Australia to use Stevia as a natural sweetener.  Pepsi Next has 30% less sugar but boasts that it still has the great taste of a full sugar cola.

I have to admit that I’m not a fan of Pepsi.  So I was a little wary of how Pepsi Next was going to taste and if I would like it.  Mr 4 was itching to try out the new ‘beer’ and had been pestering me for one since the package arrived on our doorsteps! 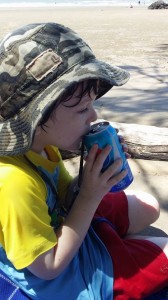 I was actually pleasantly surprised about the taste of Pepsi Next.  I was a little wary of the low sugar as I have found most low sugar/no sugar drinks have a bit of a nasty after taste.  I was glad to find that Pepsi Next didn’t.  It had a nice crisp, refreshing taste that I thought was completely different to anything I have tried before.  Mr 4 loved it and Paul was surprised at the nice taste as well.

To sweeten the deal I also have 8 cans of Pepsi Next to giveaway to one lucky reader!

All you have to do to enter is answer this simple question:

“What is your favourite picnic food”

The winner will be judged on creativity so make it as yummy as possible! Entries close next Tuesday the 11th of March so get your answers in quick!

26 thoughts on “Picnics: Pepsi Next Review and Giveaway”