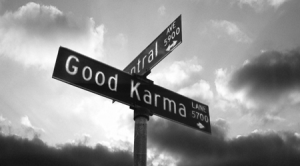 The phrase ‘Karma’ gets thrown around so much, both in a positive light and a negative one.  There is memes upon memes about letting karma fuck people up because of something they have done wrong.  The thing about karma though is that we rarely get to see it in action, at least not in a way that we see justified.

There is talk about ‘the karma bus’ and people getting what’s coming to them.  I don’t think that is what karma is supposed to be about.  Karma isn’t about vengeance it’s about receiving back what you put out into the world.  It’s not be used as a ‘sucked in’ when someone who wronged you gets hit with exactly the same kind of wrongs that you did.  So many times I see it being used in the context of cheating partners, liars, gossips and a plethora of other blights on the world.

On Monday I saw it at work for the purpose it was intended, to make people think about their own actions.

A young woman stepped on the bus and when she attempted to pay, she was short by 50 cents.  The bus driver said if she couldn’t pay then she couldn’t get on the bus.  This bus isn’t a bus that takes you from one side of town to the other, and could be walked if you so desired. No, this bus went to the next town 45km away.  An older gentleman stepped forward and gave the bus driver the money to cover the young woman’s bus fare.

The bus driver looked at the man like he had completely lost his mind and said why on earth would you give this woman money, you don’t even know her.  The man’s response blew me away, something that has stuck with me since, two days later.

This morning my car broke down and someone stopped to help me so I could come into town on the bus and get parts.  I’m paying it forward.  The world is about paying forward the kindness we receive. It’s what makes life worth living.

THAT is what karma is about.  You might never see your deeds being paid forward but that’s ok.  A good deed isn’t performed for personal accolades, even though some people forget this.  A deed is done because it’s what makes the world go around.  If we all did everything for only the good of ourselves then the world would be a lonely, dark place.

Have you seen karma at work lately? Maybe you have been the instigator of it, I would love to hear your stories.

This post is part of my weekly series called A-Z of Mental Illness.  To check out the rest of the posts click here