Welcome to my weekly A-Z of Mental Illness. Each week I will be writing about a mental health topic that correlates with a letter of the alphabet.  I have a few people doing guest posts along the way as well, just so you don’t have to listen to me drone on every week.  I hope that through this alphabet of Mental Illness I will be able to spread a bit more awareness.  This weeks post is From Vanessa at 26years and counting.  She is sharing her story about how a physical illness affected her mental health.

I offered to write a post about Glandular Fever (also known as mono, or infectious mononucleosis) for this mental health post series. While not a mental health condition, Glandular Fever is a sudden illness that can take some time to recover from and forces some immediate changes to your life – all things that could cause isolation and trauma.

In mid 2005 I was diagnosed with Glandular Fever. Like any illness, naturally this diagnosis came at the worst possible time – I was doing the final subjects of my degree and had taken on an additional class that semester to graduate on time.

The first weeks were the hellish weeks. As is common at the time, I also had severe strep throat. It got so bad that I was crying from the pain of swallowing a few sips of water. And this was while on a lot of painkillers too. It was an all-consuming few days.

It got to the point where my GP gave me an ultimatum. If I couldn’t drink easily within 12 hours, I was to go straight to the emergency department. Not to him, but to hospital, to make sure I was hydrated.

During this time I had some family visit. I have no memory of what started this, but all I can remember is one of them hugging me. Only I was very, very sick, very tired and on a lot of strong painkillers. The hug scared me, possibly more than I’ve ever been scared in my life. I thought I was being smothered & was going to die. I started to scream.

My husband told me later he had no idea what happened. All he knew is that I could barely drink water and that suddenly he heard me screaming from the other end of the house. He ran to me and sent my family away quick smart.

Those first few days I was catatonic. I just laid on the chaise lounge in front of the TV. I don’t know how or if I ate, slept or showered. If I did, it was 100% due to my husband taking care of me.

Thankfully, the antibiotics started to work in the nick of time. The worst of the pain was over.

And there were some vague good memories of that time. Like when it was the middle of the night and the Olympic downhill canoeing slalom was on. I distinctly remember being utterly fascinated by the swishing & bubbling of the water. But that may have been the painkillers talking.

But I was left with rest of glandular fever to deal with. I needed to rest. Only I didn’t. I took to walking. Kilometres a day. I’d decide to walk to one op shop, then figured I was near another, so I went to that one too, and so on. Day after day I would find some similar excuse to walk.

At the same time, I felt like I was at my GP’s office 3 times a week for check ups, blood tests and results. Glandular fever can mess with your kidneys and spleen, so regular blood tests to ensure there’s no damage to any organs are a must.

The other major stress in this time was of course the five subject semester I was enrolled in at uni. I wasn’t willing to give up completing my degree on time “just” because I was sick. The uni I went to was good, but fairly traditional. Meaning, they look down their noses at distance education. So I was left to negotiate trying to be allowed to study from home.

As the exhaustion was unpredictable, I did my best to attend classes when I could. But that was the limit of my capability.

In one tutorial, we were expected to update the class on the topic we’d chosen for our major essay for the semester. I could basically only tell the class the topic I had chosen. I’d done some research, but as with a lot of research, you find a lot of dead ends before you find what you want. I had only found dead ends. But the lecturer didn’t seem to recognise anything was wrong. He kept asking me to tell the class more. I couldn’t. I was getting that clear look of disgust that he thought I was just a stupid slacker. Being someone who loves learning, that hurt a lot. I felt so devalued & unwelcome that I don’t think I put a lot of effort into going to his class after that tutorial.

In the end, I realised how much I was struggling. I went to my GP and got a letter to send to my lecturers, asking that I receive consideration with my studies due to ongoing illness.

I emailed this letter to my lecturers and tutors, asking that I be sent lecture notes when I couldn’t make it into class or that I be allowed to submit my assignments by email, rather than a physical copy in a physical drop box by the physical office. Most of my replies were vague “We’ll see” kind of responses, if I was lucky enough to even get one.

I actually contacted the student services department, knowing they had an advocacy area. Their website said they could help students who had “long or short term illness or disability”. I figured glandular fever fitted the definition of a short term illness. They didn’t disagree with me on this, but they also couldn’t do anything to help. I asked what they could do to allow me to have lecture notes on days I couldn’t make it to class. They said they could ask the lecturer. I said I could do that & already had!! It turns out their experience is with making an old campus wheelchair friendly – admirable of course, but they had no experience with illness that was unpredictable. I feel sorry for any student there who had a permanent illness, particularly something very unpredictable like an autoimmune disease. They would have no support at all.

In the end I managed to get in-person answers from my lecturers only. Most were very nice about it, even if they were useless via email. The lecturer I mentioned earlier, well he gave me the minimum passing marks possible for tutorial attendance and participation. Considering I usually got very high marks for tutorial participation (I love organised arguments!), it felt like a big snub.

This was just my experience of glandular fever. I was lucky to not have any complications and to have a very supportive husband to help me through it. Glandular fever is a stressful condition – I’m far from an expert on mental health, but it seems logical that it could be a trigger for someone with a pre-existing mental health condition. It’s also a time when you’re so focused on physical health that you can neglect your mental health.

26 Years and Counting is Vanessa’s personal blog about lifestyle, exercise, healthy eating & everything that makes her, Vanessa. You can find her over at www.26yearsandcounting.wordpress.com. She also tweets a lot @26yearscounting 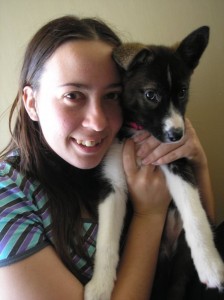 One thought on “G is for Glandular Fever”