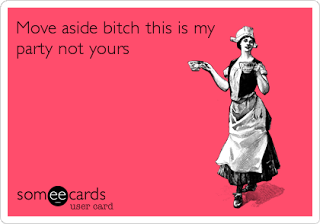 A conversation on twitter yesterday got me thinking about my 21st.  In Australia the big parties seem to be the 18th, 21st and then the decades there after.  My 18th was pretty non event so I was holding out for my 21st.  The universe however had other ideas. I was 6 months pregnant with Devil Spawn for my 21st so my birthday was a no alcohol for me event.  I wanted to just go to the local pool and laze around in my giant pregnant state but apparently that was unfair to all of my other able to drink guests. Whatevs
Just to throw another spanner in the works Devil Papa also got shingles in the week before the party so he was too tired to stay much longer than a couple of hours.  It did make the night relatively cheaper though as two of the biggest drinkers were out of action!
My family traveled down for it (7 hours so was a bit of a hike for them) and we had dinner at a local pub. I had a few friends come along and it started off as a nice night.  Until one annoying friend, who is no longer my friend, started to complain.  Some part of her brain malfunctioned and she thought that the night was about her. Her brain malfunctioning is all that I can think of because surely no one is as selfish as she acted that night.
The party started at 630pm (I think, the memory is a bit fuzzy) and after half an hour she was complaining that she was bored and wanted to know when we planned on going clubbing.  As I already mentioned, my family had traveled 7 hours to be here, they sure as hell deserved more than 30 minutes of my time.  Also no one in their right mind goes clubbing at 7pm, there is no one out and you look like a dick.
My party was also a sit down dinner…no one had eaten.  If you have ever been pregnant or been around someone who is pregnant, then you know that nothing stands between a pregnant woman and her food.  Especially at the particular pub we were at. They are known for their giant meals.  Devil Papa and I go there regularly and often take left overs home as there is enough for another meal.
I tried to ignore said friend to no avail. She was adamant that we must leave as soon as possible for the clubs.  She even made a point of walking out in a huff (aka adult sized tantrum) after I had said for what felt like the 1000th time that no we were not going anywhere yet. I hadn’t made plans to go clubbing at all but if the opportunity arose I’d take it. 8pm was not the opportunity that I saw.
The party came to a close and a few of us decided to go to a large hotel that was in the vicinity of the clubs but not completely full of douche bags.  As I mentioned, I was six months pregnant at the time and just wanted to dance without someone grinding their groin on me.  As the hotel was mainly filled with middle aged women at the time, instead of getting my arse grabbed there was lots of belly rubbing to feel like Devil Spawn kick.  He obliged by doing his usual Mexican wave across my stomach.
This ‘club’ was obviously not to the standard of which my ‘friend’ was hoping for.  She once again still forgot that it was in fact my party and we were going where I damn well said we were. Yes I was an only child for 11 years…how did you guess?  She complained and huffed about how we weren’t doing what she wanted to do.
After my parents left, I told her to go do what she wanted because I was sick to death of her attitude.  I was pretty reserved and had to tell another friend who was there at the time to leave it, because I was very close to telling her to go fuck herself.
While this friend didn’t ruin my night, it made the night very unpleasant.  Her selfish actions left a sour taste in my mouth and it wasn’t too much longer after that, that I cut her out of my life completely.
Have you had a party ruined by someone else’s attitude?