Welcome to Reader’s Choice Thursdays.  This is our third week and so far I have learnt so much. The most important thing I have learnt however is to not tweet while watching trashy tv if I still don’t have a topic or a certain blogger (I’m not mentioning any name *cough cough* will take it with both hands and I’ll be writing about vjazzling or like this week….Lingerie Football. 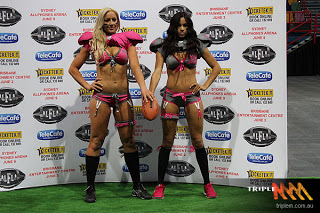 So what exactly is Lingerie Football? Despite the name, the women don’t actually play in skimpy lace numbers.  No they more closely resemble a cheer leading outfit than something you’d wear under your clothes.  It was founded in 2003, originally as a pay per view event showing opposite the half time of the Superbowl.  It is now a staple of Superbowl Sunday and is shown in over 85 countries worldwide.  The game consists of two seven-a-side teams.  Each team can have up to 20 players but only 14 are used on game day.
At the moment Lingerie Football is only played in the US and Canada.  However it is currently being promoted in Australia with the hope to officially start a season in 2013.  It is not without it’s opposition however.  Sports Minister Kate Lundy was quoted as calling the sport ”cheap, degrading perv”.  This hasn’t stopped women trying out though.
There are some groups who call Lingerie Football a sport that makes women into sexual objects.  Me? Hey if I had a body like these girls I would sure as hell be showing it off too.  These girls are athletic and strong.  In my opinion they are actually providing a positive body image. A hell of a lot better than any Runway Model that’s for sure.  No one is forcing these women to run around chasing a football in a bikini and let’s be honest there’s more skin on display at the beach than these girls are showing.
Critics are up in arms that this sport has tickets sold that are targeting families.  Are we really turning into that kind of world. A world where no one thinks for themselves and has to have a government dictate what we can and can’t do.  Use your common sense people.  If you don’t feel comfortable taking your kids to this kind of sporting even then don’t but don’t ruin it for the rest of the people.  Do I think it should be aired on Free-to-air television? No, but people who are willing to pay for it shouldn’t be denied.  All of the women involved are consenting adults, who are over the age of 18.
What’s your take on Lingerie Football? Pervy or perfectly fine? If you had the body and the confidence would you do it?
For more Reader’s Choice Thursday head on over to Help!! I’m Stuck!!