A few weeks ago a discussion started on a friend’s status update about the stupid things that crisis line workers had suggested when we were in crisis.  It was the catalyst for a rant to Paul about the unfairness of relying on other people to help you when you were feeling vulnerable.  It spilled into conversations with my psychologist about how I now use having to deal with crisis lines as a deterrent for self harm. 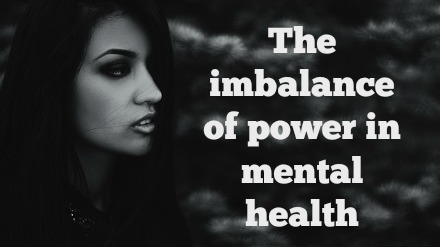 It was through these conversations that it hit me just how unbalanced the power is when it comes to a person with a mental illness.  This imbalance spills into other parts of their life as well.  Their physical needs are often written off as symptoms of a mental illness.  Chest pain is a panic attack, stomach pain is anxiety, an allergic reaction is depression (this one happened to someone I know!).

Recently a friend was a passenger in a taxi when it was rear ended.  When she presented to hospital she was asked all of the usual questions when being triaged.  This friend has visible scars on her forearms, but did not mention her mental health history (it had been 4.5 years since she had been a patient at this hospital) as she felt it wasn’t relevant.  Her mental health history wasn’t discussed during the consultation.

When my friend was discharged from the Emergency Department she received a summary of the treatment received while at the hospital.  This summary also listed a mental illness under conditions she is diagnosed with.  She hasn’t met the criteria for that diagnosis for 3 years and this mental illness wasn’t discussed during her consultation.  Yet experience has taught me that if she had made a complaint about this, it wouldn’t have been taken seriously.

When I was unwell and living mostly in crisis mode, I would use the crisis team regularly.  I received a myriad of responses over the years.  I was told to bake muffins when suicidal, asked, with exasperation, what I expected them to do, told to self harm and just get it over with.  Presentations to Emergency were written off as social calls, excuses to spend time with people and painful reflux (undiagnosed at the time) written off as attention seeking behaviour.

In all of these interactions I was not considered an equal.  My opinions about my treatment were not considered.  I was written off because people with a mental illness couldn’t be physically unwell too.  If someone with no mental health history presents to Emergency with a broken leg, their motives are not questioned.  Their treatment is rarely hindered by more than a busy, overworked department.

I’m not asking for miracles.  I know that the reality of the world we live in means that there will always be an imbalance of power.  However I do ask that those who are in positions of power, who deal with those with a mental illness, acknowledge that imbalance.  I want them to acknowledge that the people they work with aren’t beneath them, that they are people beyond a mental health diagnosis.  I want them to realise how much we lose when we open ourselves up and get hurt by the people who are supposed to help.

How do you think we could close the divide of power imbalance?

Have you experienced the power imbalance yourself?

12 thoughts on “The imbalance of power in mental health”