Borderline Personality Disorder (BPD) was first included in the Diagnostic and Statistical Manual of Mental Disorders (DSM) in the third edition which was released in 1980.  However the term borderline was first used in the medical profession by a psychologist named Adolf Stern*. 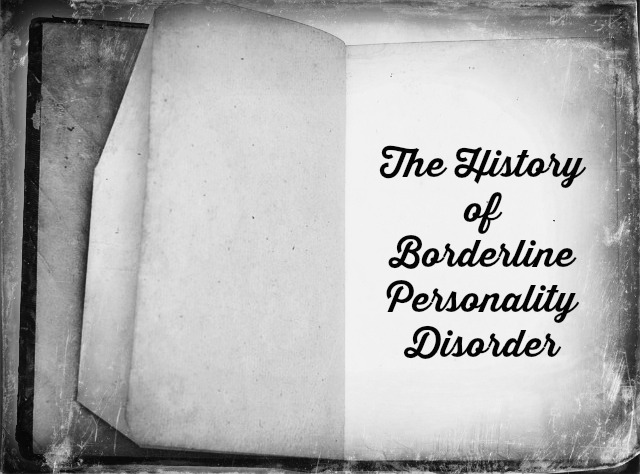 Stern believed that patients in the borderline group were between the psychosis displayed by people with schizophrenia and the neurosis shown by mood disorders such as depression and anxiety.  However this theory has since been debunked and it is instead believed that people with borderline have intense emotional instability, resulting in combinations of the nine diagnostic criteria of BPD.

People with BPD were believed to have a series of mental disturbances which did not fit with any other mental illness.  It was also believed that it was the wasteland of psychiatry diagnosis, given only as a last resort.  It is this belief which appears to have lead to the idea that people with BPD are too difficult to treat.

A research paper was published in 1975 by John Gunderson and Margaret Singer which collated all of the readily available information about BPD.  This paper was widely read by the medical community and allowed practitioners to make a more informed diagnosis decision.  This was the first step in proving that BPD is a valid mental health condition.  This also lead to the inclusion of BPD in the third edition of the DSM.

Further studies were carried out during the late 1970’s and throughout the 1980’s which showed positive results when BPD patients were treated with low dosages of anti-psychotic medication.  While no medications have been shown to treat BPD as a whole, medication has given patients positive results in lowering the occurrence of individual symptoms experienced by people with BPD such as mood instability, sleep disturbances and anxiety.

More studies were released during the 1980’s which showed disturbances in the areas of the brain associated with the symptoms of BPD.  It is still up for debate as to whether these disturbances occur when the brain is developing in the womb or if they occur after a patient experiences major trauma.

Quite possibly the biggest leap in the history of BPD happened in 1993 when psychiatrist Marsha Linehan introduced Dialectical Behavioural Therapy (DBT).  Linehan had worked extensively with patients who were the victim of abuse and also those who engaged in self harming behaviour before introducing DBT to the psychiatric community.  At a later date, she also revealed that she was diagnosed with BPD herself.  The introduction of DBT has helped to shift the belief that people who are diagnosed with BPD are not able to be treated.

The history of BPD is checkered and a lot of the original beliefs about the disorder are still around today.  Treatment means that the prognosis is a lot better than in the past.  BPD is also one of the few mental health conditions that people can make a full recovery from.  After adequate treatment, patients are able to better manage the symptoms which lead to a diagnosis of BPD.