Mr 6 loves tacos more than any other food.  In fact he recently said that I was 2 trillion the best because I made him tacos for dinner.  I also love tacos because they are super easy to make.  I buy the stand n stuff soft tacos (or taco boats as we like to call them) because they are easier for Mr 6 to handle.

I usually send the left overs to school with Mr 6 the next day as well.  However I found that they were a pain to put in his lunch box and took up a bit too much room.  I wondered if I could use muffin tins or cupcake tins to make a smaller version of the stand n stuff tacos.  So the easy mini tacos were born! 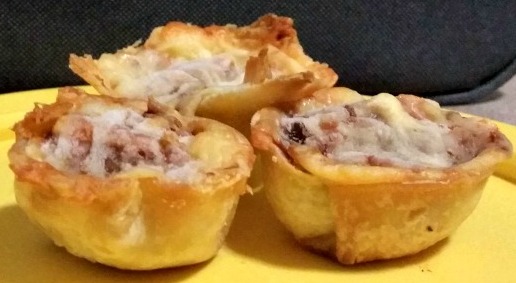 Mr 6 loves these bite size tacos.  You can use different fillings as well.  I had some cooked chicken that I needed to use up and that tasted great as well.  I used salsa with the chicken though to give it a tangy boost!

Does your family love tacos?

What is your favourite topping?