*The following post discusses self harm and suicide.  Please make sure you are in a safe place mentally before reading.  If you are struggling with suicidal or self harm thoughts please contact someone.  LifeLine: 13 11 14, a friend, your GP or your local mental health crisis team.*

For the next few weeks I will be dedicating posts to explaining the diagnostic criteria of Borderline Personality Disorder.  I am hoping that by writing these posts, there will be more positive information about BPD.  At the moment a lot of the information I have found is a little (OK a lot) disheartening, especially for those who are newly diagnosed. 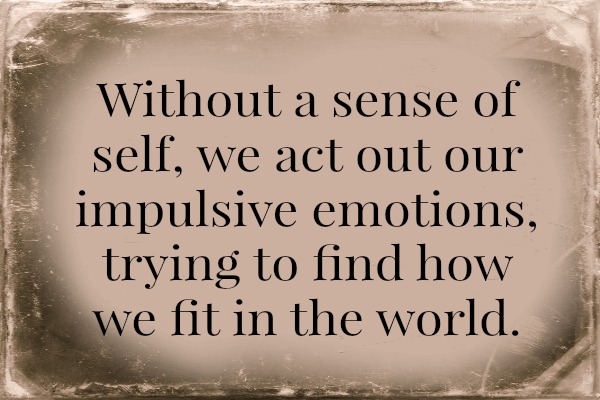 Last week I talked about Black and White Thinking and today’s post will be about the sense of self worth, or rather the lack of.  Having a sense of self means that you know who you are, what your qualities and strengths are and your personal attributes.  Your self worth is how much you value yourself and your input into the world around you.  It all sounds a little philosophical, but it’s an important factor in feeling safe in our world.

The sense of self and our worth is something that is built on from a young age, usually by the people around us.  Marsha Linehan believes that our sense of who we are is developed by observing our own emotions, how they compare to those around us and their reaction to those emotions.  She believes that the inward feelings, and the outward responses are often skewed, leading to the unstable sense of self.

Using this other being, also allowed me to have someone else to blame when things didn’t go right.  I almost felt like I was standing outside my body and watching it move all on it’s own.  I felt powerless and would often do things that I could feel myself screaming from the inside not to do.  My impulse control was low (I’ll be talking more about this in future posts) and I would emotionally act out in order to cover up what I was really feeling.

I have talked quite a few times on the blog and my Facebook Page about being more than my diagnosis.  However for years I struggled to name those other things, even things that seem simple now like daughter, sister, friend.  I saw myself as a mass of illness, rotten to the core.  My suicidal tendencies were at their worst during this time, as I tried to kill the illness.  I believed that I could do that and survive, like something out of a science fiction movie.

My self of self and the worth that I have placed on myself has definitely improved over the last few years.  I’m not in that dark hole, and I can see that there is more to me than an illness.  I still struggle with my place in the world and seeing my own worth as a person.  It’s definitely a work in progress though.

Do you know who you are?

Have you ever struggled with your sense of self?

10 thoughts on “Sense of Self”