This year has been an interesting year.  I’m glad to see the back end of it, but of course I know that the turning of the clock doesn’t magically make things better.  However I wanted to have a bit of reflection and take stock of the things that have happened this year.  It’s so easy to get bogged down in all of the negative stuff that happens, Mrs D created this great way of remembering everything that happened for the year.

The first thing that came to mind when I think of the beginning of the year is that Paul and I celebrated 6 years together.  We’re pretty lucky that our anniversary falls on a public holiday so we can relax.  In 2015 though it will be the day before Mr 5 starts school so I think there will be a few mixed emotions about it all!

I think this year my biggest regret was not having the funds to attend Problogger.  So many people attended this year that I would have loved to meet.  I had such a great time in 2013 too.

In hindsight, the funniest thing was having to explain to Mr 5’s kindy teacher that no, his brother hasn’t been shot and his grandfather doesn’t live in Africa.  Kids imaginations are the greatest thing sometimes. 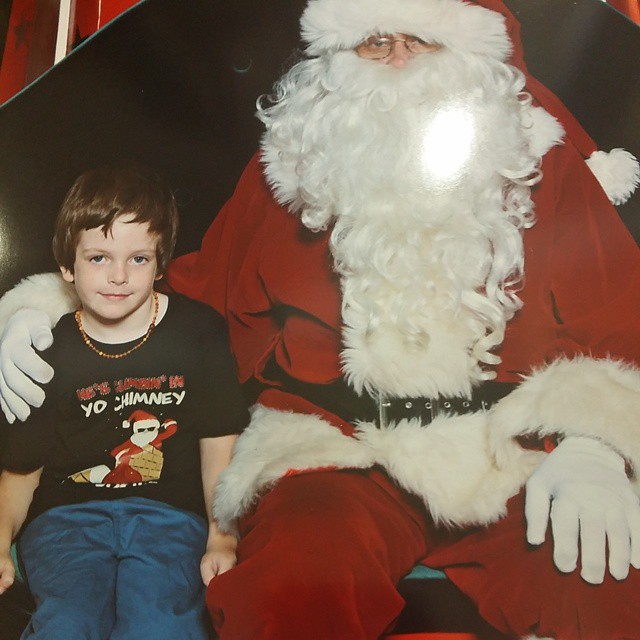 This was Mr 5’s first Santa photo on his own since he was a baby. I was so proud of him.

My proudest moment of 2014 was my month of posting about mental health which involved being interviewed on local radio as part of mental health week.

The best purchase we made was a life vest for Mr 5 to use in the pool.  His water confidence has gone up so much since we got it.  We’ve taught him that he’s not to go in the water without it but him wearing it hasn’t been an issue.  It was such an asset while we were on holidays because it meant that Paul and I didn’t have to hold on to him while in the pool.  Especially when the pool is 1.4m at it’s shallow point and we’re only 1.6m!

I didn’t really have a favourite outfit for the year.  As long as something fit and was comfy then I was happy.  I definitely won’t be a fashion blogger any time soon that’s for sure!

My best month on the blog was October.  It was the month that I posted every day for a month, and it really helped me to get things organised with my writing.  I think in life my favourite month was July, because it included Mr 5’s birthday.  It was the first birthday I did to a theme and it turned out great.  I may have ended the weekend with not wanting to look at another cake again, but Mr 5 loved it and that’s what is important.

The biggest achievement of 2014 was pushing through my fear and doing the interview on radio about Borderline Personality Disorder.  I also smashed through a couple of stats goals that I had set for myself here on the blog.

Television took a bit of a back seat this year.  Sleep was the the main aim of our year and so TV tended to just be background noise while I tried to catch up on things that I was too exhausted to do.  I just couldn’t sit and focus on one thing.

This news headline was a little closer to home than a lot of the major headlines of the year but it was something that stayed with me for a long time, and something that I still think about.  Queensland Health are building a long term residential mental health facility in my town.  There was public uproar because ‘won’t someone think of the children’.  It was stigma at it’s worst and I was disgusted to read the things people said on links to the story.

What made you belly laugh

A few weeks ago we discovered a TV show that quite possibly combined two awesome things.  Mr T and fail videos.  It was hilarious, although I think that listening to Mr 5 roll around the floor laughing (literally!) was the best part.

The biggest decision I made this year was actually made a few weeks ago.  I enrolled to study a Web Development Course.  I have been thinking about study for a while, and decided that this course would help with growing my blog.  I handed my first assessment in last night, but I’m still getting used to the whole study thing.

This year I learned that I am stronger than I realise.  After years of sleep deprivation with Mr 5, I thought that we were putting it behind us.  However after still not feeling any better, despite now getting a fulls night sleep, my GP decided to dig a little deeper.  It turned out that I have sleep apnea.  So I learned that it’s always a good idea to follow up on tests, and don’t stop until you have an answer.  Although I know that I am lucky that I was able to find an answer.

What made you cry

My emotions have been all over the place this year so it would probably be a shorter list to say what didn’t make me cry.  I cried at Ads on the TV, watching neighbours, during kids movies, when sleep was elusive and when my psychologist hit sore spots.  The list goes on.

Most random thing you did

The most random thing I did this year would have to be that Q&A was held in Rockhampton and I got to be in the audience.  The initial radio interview that I gave was completely random too because I only went out the door I did to get away from the crowds.  It was just a pretty awesome chain of events!

What was your highlight of the year?