Recently I read the book Big Little Lies by Liane Moriarty.  There was a part of the book, which didn’t really have anything to do with the overall story, but it stuck out to me because it was something that I have faced.  The character was talking about her children not sleeping, and that people who had children who slept believed it was because of their great parenting.

If parents had children who were good sleepers they assumed this was due to their good parenting, not good luck. They followed the rules and the rules had been proven to work. Celeste must therefore not be following the rules. And you could never prove it to them! They would die smug in their beds. 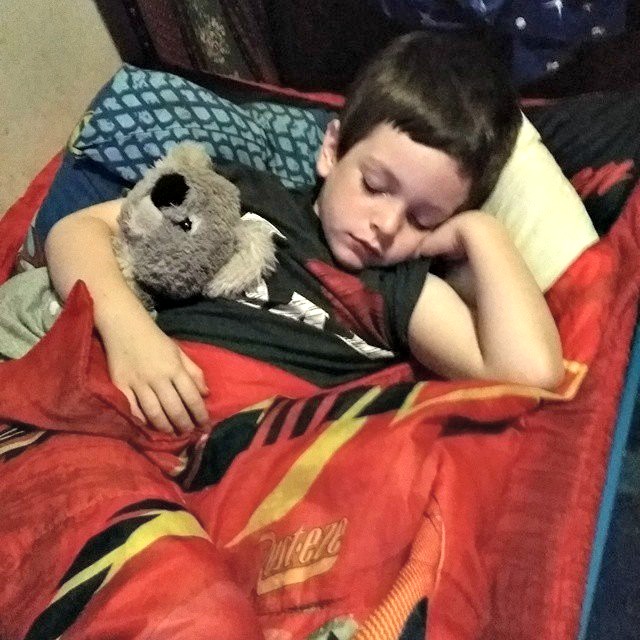 I have spoken so many times on the blog and social media about Mr 5’s sleeping issues.  It was so out of the blue for us, he was a perfect sleeping angel up until he reached 2.  Then it went downhill from there.  We hadn’t changed our bedtime routine and yet we had a child on our hands who was refusing to sleep.

He stayed awake for hours on end.  He wasn’t crying, he wasn’t upset, he wasn’t hot or cold.  He had block-out curtains on his windows to try and stop the streetlights from lighting up his room.  We tried letting him sleep with the light on, we tried a night light and we tried having the room as dark as possible.  On the advice from the psychologist we moved his bed time to a later time, still he was awake for hours.

One of the most common things I heard, mostly from strangers or acquaintances,  was that if that was their child they ‘wouldn’t put up with that’.  It was like they believed that I was letting him run riot through the house.  It couldn’t be further from the truth.  At bedtime he was put in his room. The only reason he was allowed to leave was to go to the toilet.  He wasn’t allowed to play.  I wasn’t ‘allowing’ anything to happen.

It amazed me the amount of people who believed that if I just tried what they were doing (which wasn’t a whole lot to be honest) then we would see a miraculous change in his sleep patterns.  If we just ran him ragged then he would give in, if we just did anything they suggested which they were sure worked for their child, then we would have a good child too.

That was the issue.  Mr 5 wasn’t bad because he couldn’t sleep.  He’s not a horrible child because he has trouble falling asleep.  I have trouble sleeping too, does that make me a bad person?  It sounds ludicrous when you say it like that doesn’t it?

I’m so glad that melatonin has helped us.  Mr 5 is finally able to fall asleep easily, he sleeps more soundly and I have noticed his tantrums are getting further apart.  He wasn’t a bad kid, he was just chronically tired.

Do your kids have trouble sleeping?  Are you sick of people telling you that they wouldn’t let their kid not sleep?