Today on the blog I have Amy from Handbag Mafia who is sharing the story of her Nan. Please make her feel welcome.

My Nan was a wonderful lady. She was a terrific cook and could knit up a storm. At a young age, she fled Germany with her Father, but could still remember parades of goose-stepping soldiers and terrifying warplanes swooping low over her hometown. She also remembered, vividly, the death of her own mother she was just a small child. Her memories were disjointed, though, and sometimes she wasn’t quite sure how recent they were.
That was due to her schizophrenia.

There is nothing you can do to prevent schizophrenia. It’s thought to be hereditary, though trauma like early parental loss can be a factor. It breaks my heart to say, but my Nan lived through quite a lot of trauma, from a tumultuous childhood to losing her own son when he was in his teens. She immigrated to Australia and faced hostility for being German and her marriage was not a happy one. I remember my mother recounting times she would have to trick her into going to hospital for treatment, including ECT. The mental health system we have today is by no means perfect but it is far better than what was available to my lovely Nan.

When I was a little girl, Nan would look after me. I remember her singing to me- German cradle songs and nursery rhymes. She was never without her knitting and crochet work and smoked heavily from a young age. She would be constantly making us jumpers and hats and scarves that were beautifully made but usually in a riot of mismatched colours. Whether this was a result of her condition or just eccentric tastes, I’ll never know, but even now, over a decade since she passed away, I have colourful knitted bed socks to remember her by.

As I got older, I could see that all wasn’t right with Nan. She would tell strange stories that didn’t add up. I soon worked out this was more common in the few days leading up to her doctor’s appointment for a monthly injection, something she had in conjunction with a bunch of pills- I never knew what they all were. One time she told me how Bert Newton and Don Lane were old friends of hers and that Bert was always sweet on her- she said that he was very persistent and that if she hadn’t refused him, Bert may well have been my grandfather! While I can’t help but smile at that memory, the ones that tear at me are about her most persistent delusions.

Nan believed that “The Germans” had at some point started following her and never stopped. She believed that every pain or cough she had was inflicted on her by these people with what she called “the apparatus”. She would say “Oh, my back is sore- it’s the Germans.” If you asked her about it she would tell you they were out the front of the house, in a white van, using the apparatus. I asked her once what the apparatus looked like. She described an old leather suitcase or doctor’s bag that housed the machine but couldn’t say much more- not because she didn’t know but because she seemed too frightened to say more. It was never really clear who “The Germans” were either- only that they were out to hurt her.

I remember her coughing. She smoked up to 100 cigarettes a day at one point. After a coughing fit one day, my dad said to her that perhaps she should smoke less, to get rid of the cough. She told him it wasn’t the cigarettes but the Germans making her cough. He asked her where they were. She told him “Out the front, in the van.”

Dad raced out the front to “catch” the Germans for her. He thought that maybe if he could show her there was no van, no Germans and no apparatus, she would let go of the delusion. He did this a number of times. Each time he would say “Look- no van!” and Nan would smile and shake her head sadly, telling him they were far too quick for him.

This really illustrates something that is so important to understand if you care for someone with schizophrenia: You simply cannot argue their reality. For Nan- that actually was her reality. In her world, the majority of her life was being relentlessly pursued by faceless people in a van who had a machine to cause her pain and illness. When asked, she couldn’t articulate why this was the case- it just was.

Arguing a person’s reality won’t get you anywhere- if I argued with you that the sky wasn’t blue, there is nothing I could say that would convince you I was right and you were wrong.

In my experience with my Nan as well as my work in aged care (something that lead to gaining further experience in caring for elderly people with mental illness) I found the best way to deal with a different reality, alongside appropriate medical care, was to accept that this is what the person is was actually living with and then to try to distract from it- making life as pleasant as possible for the person in the hope that it would minimise the negative thoughts of “The Germans” or whatever it was that haunted that person. I’m not giving qualified medical advice here or saying that every schizophrenic person has a version of Nan’s Germans – just sharing what seemed to help a much loved Grandmother that lived with the shadow and stigma of mental illness over her life in the hope that maybe it will help someone else, too. 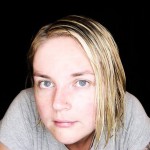