Robomum is hosting The Lounge this week and has chosen the theme of Midwives.  Women who must have the hardest, most rewarding jobs.

When I was pregnant with Mr 4 I tried not to give too much thought about the whole birthing process.  I went along to the antenatal classes and we watched a video that was clearly from either the 80’s or the 90’s.  I still chose to put my head in the sand when it came to most things birth though, I figured that there wasn’t too much I could do to really prepare myself for it.

I was just over 37 weeks when I went for an antenatal appointment, I was down to weekly at that stage.  I was feeling the best I had felt in weeks.  I had walked across to the local shopping centre the week before and felt horrid after doing it.  Surprisingly despite feeling great, my blood pressure was through the roof and I was booked in to be induced.

It all felt a little surreal and I couldn’t believe that soon I would be holding a baby, like a real actual baby!  The gel didn’t work and I watched on jealously as the woman across from me, who was induced at the same time, was wheeled off to the labour ward.  She returned with the midwives, with a beautiful little girl, all while I was still in one place.

The night before Mr 4 was born, I think I peed every hour.  It was one of the longest nights of my life.  I was filled with trepidation and excitement.  I sent frantic text messages to my mum saying that I wasn’t sure if I could go through with the whole birth thing.  The midwives were busy but were reassuring when I stopped them to ask questions.

After the gel didn’t work I was hooked up to a drip to speed things along.  We were going to have a baby by the end of the weekend, even if he had other ideas.  I chose to have an epidural and it was bliss.  After experiencing ridiculously braxton hicks the night before from the gel, it was nice to be able to have a rest.  I could move my right leg but my left was completely numb.

I was extremely lucky and I got a student midwife who had been assigned to stay with me her whole shift.  It was reassuring as a first time mum to have someone there to answer any questions that I had.  However Mr 4 was stubborn and when her shift ended he still hadn’t made an appearance.  In fact it would still be another 6.5 hours until he graced us with his presence.

Once things started to ramp up, the epidural was turned down so that I could feel the contractions enough to know when to push.  In hindsight I was pretty amazed that my body just knew what to do.  I had two midwives assisting with the birth and one of the best things that they did was to tell me to imagine that I was trying to push against her hand with each contraction.  It really helped to visualise something while I was pushing.

At 8:33pm on the 19th of July Mr 4 made his entrance into the world.  There was a radio playing in the labour room and not long after he was born ‘A Little Ray of Sunshine‘ started playing.  It was perfect, yes I know it’s about a girl but Mr 4 really is a little ray of sunshine. 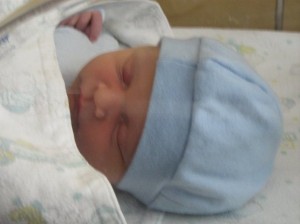 I was really lucky to have a positive birth experience because I know it’s not the same for everyone.  I really believe that the midwives surrounding you during your birth can either help or hinder your experience.  So if you have a great midwife, or know one in your life, then please tell them how awesome they are!

Double dipping this week with The Lounge and Thankful Thursday.

12 thoughts on “A Little Ray of Sunshine”