*The following post contains material that may be triggering.  Please make sure you are feeling safe before continuing to read.  If you or someone you know is struggling then please seek professional help through your GP or give the people at Life Line a call on 13 11 14*

Tomorrow, the 1st of March 2014 is International Self Harm Awareness Day.  Self harm and it’s effects is something that is very close to my heart.  I have written about different aspects of self harm including myths, first aid, tips helping loved ones and documentaries. 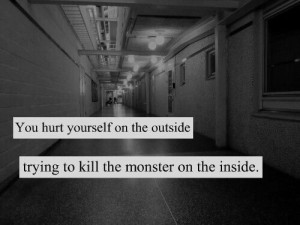 I grew up in a small country town.  I was the only person I knew who self harmed.  I often turned to the online world for support from people who understood the urges, the desires and the deep seeded guilt surrounding acts of self harm.  The online world has exploded since I was a teen, there is Facebook groups and forums for people who want support.   I still turn to these groups and social media now for support.  Sometimes it is easier to tell people you can’t see that you are struggling.  There isn’t as much guilt for the effect the words ‘I want to self harm’ has on someone on the other side of the screen when you can’t see them.

It took me years to understand what was going on when I began to feel the urge to self harm.  I would often shrug my shoulders when asked what I was feeling that lead to the thoughts.  In simple terms, self harming behaviour is a coping mechanism.  It is not a particularly healthy one, and so therapy is encouraged to help replace the self harming behaviour with more positive behaviours.

My psychologist has helped me to understand that self harm is often related to feeling overwhelmed by emotions.  We all have emotions that we struggle with, people who engage in self harming behaviours find these emotions unbearable.  This unbearable emotion differs from person to person.  For me, I can’t bare to feel sadness and anger.  Feeling these emotions feels like a never ending tunnel.  Not only did I believe there was no light at the end of the tunnel but that the end of the tunnel didn’t exist at all.  I believed that the only way to break the cycle was to self harm.

It is my belief that there is no one point that draws a person to self harm, there is no cookie cutter diagnosis as to what the cause is.  For me personally it was often used to dull my emotions, to shift the focus from the emotional to the physical.  It was much easier to deal with a physical pain than it was to deal with the turmoil that I felt inside.  I would go into a trance like state, taking care of my physical needs, the emotions numbed for now.  The trouble with self harm, like any addiction is that to achieve the same feeling time after time, the actions need to be worse than the time before, more destructive.

In the last five years, I have only self harmed once.  I attribute a lot of that time to my gorgeous, full of life almost 5 year old.  I was on a path of destruction before I found out I was pregnant with him.  He is the reason I haven’t completely given up on myself.  He is the reason that I put one foot in front of the other.  Things may not be going along as well as I would like..but they could be so much worse.

Self harm thoughts are still something that I deal with on a daily basis.  I am slowly putting things into my toolbox to help deal with the feelings that can lead to self harming behaviour.  I continue to attend therapy, removing toxic influences from my life and building on the mechanisms that I already have.  I hope that by continuing to share my story that I can help at least one person feel less alone.  The more we talk about the hard stuff, hopefully the easier it will be for those suffering to reach out.

To help spread the word far and wide I am opening my blog for people to link up their stories of self harm.  Self harm comes in many different forms, there is no one fits all.  Self harm affects more people than we realise.  It’s time to shine a light on this.