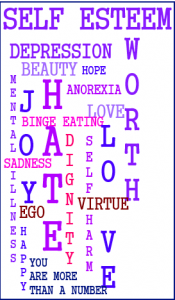 I have made no secret of my disdain for the local public mental health system.  I seem to get handed the bottom of the barrel case manager and lately the doctors are not much better.  I am currently seeing the head psychiatrist..but this doesn’t mean that I am receiving better treatment for my Mental Health.

At a recent appointment with the Mental Health appointed psychiatrist, the doctor felt it necessary to mention my grey hair and weight.  He had the notion that I was keeping both of these things in an *unattractive* state in order to continue to have something to keep my mental health unstable about.  His reasoning being that all women place their self worth on their appearance and so by making my unworthy of being ‘beautiful’ I was in turn keeping my self worth low.  I could rant all day about his stupidity but I promise I will try to keep it short.

In the last 2 years I have put on a lot of weight, enough weight to be a whole other person.  I’m not proud of it, I don’t like it but I have finally come to a point where it doesn’t affect my mental health as much as it used to.  I have stopped weighing myself obsessively and I no longer binge and purge.  I’m not at the place that I 100% want to be, but I am making steps to be there, and I’m ok with that.

I no longer place all of my self worth on being ‘that size’.  I have come to realise that it doesn’t matter how much I weigh or the number on the clothing tag…my mental health issues are still the same.  My outward appearance can dramatically change, and the feelings beneath the surface driving those decisions doesn’t change.

I was dumbfounded that a supposed professional from mental health was telling a patient that their self worth, based on their gender, was based purely on what was on the outside.  This man is dealing with women day in day out who no doubt have some form of body issues, who hate the body they are born with and here he is telling them that it’s normal to feel that way about yourself because you are woman.  Does that mean that if I was a man who was overweight and had grey hair it wouldn’t even be brought up because in his eyes a man’s self worth wasn’t based on his outward appearance and so wouldn’t affect his mental health?

Also who is this man to decide what is beautiful? I may not be completely happy with my appearance but there are plenty of women who are the same size as me and are more than happy with how they look.  Does this mean that because they don’t fit into what society deems as beautiful that their mental health and self worth should be low?  On the other side of the coin, there are the women who do fit into that tiny mold of what beautiful is.  Does that mean that their self esteem and mental health issues are less important?

Self worth is such a personal thing.  No two people have exactly the same sense of self worth.  Our self worth also changes as we go through life.  Something that meant the world to you when you were 16 may not even be a blip on your radar when you are 20.  For some people it may be their looks..and that is ok.  I just find issue when someone makes the assumption that we all have the same self worth goals based on nothing more than gender.  Having a vagina is about as far as the same-same goes with being a woman.

What makes you feel worthy? Has it changed dramatically as you’ve gotten older?

Linking up with Kimboslice for The Lounge.

27 thoughts on “Mental Health..more than just the surface”