I read an article from a journalist who had visited her friend during a stay in a psychiatric hospital.  The article was filled with generalisations about the experience of staying in a psychiatric unit and I worry that articles like this one are doing damage to our fight to end stigma. 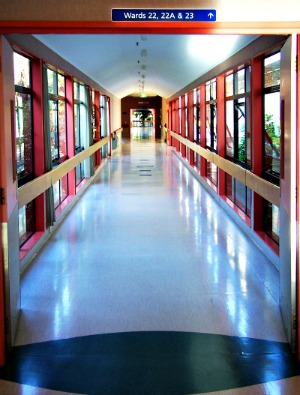 I really struggled with the gross over generalisations that were made in this article.  Things that could easily be seem as scare mongering.  Imagine being a person whose psychiatrist has suggested you have some time in a psychiatric ward and you read this article. It’s likely to make you shy away from even thinking of the prospect.

I get the impression from the article that the writer’s friend was in a private facility. Something that I have no experience with.  There were somethings in the article that did ring true for a public hospital but they were still gross generalisations.

I have seen patients who looked like walking zombies.  These patients were violent when not medicated. I have also seen these patients months down the track, once the medication is settled and they are a completely different person. They have gone from a person with delusions, suicidal behaviour, someone who couldn’t function in society, to someone who you could sit down and have a conversation with. They are someone who can string words together. They are the good outcome of the psychiatric facility.

Comparing the modern day facilities to One Flew Over the Cuckoo’s Nest is just the tip of the iceberg.  While some nurses and doctors really shouldn’t be in the profession anymore as their passion is gone, this is no reflection on the end result that a stay in a psychiatric ward strives for.  The author saw a glimpse in a persons journey.  She had no idea how far they had come or how far they had to go.

The comments of the writer about her friend being ‘normal’ except for needing to be in a psychiatric facility are extremely harmful for the fight of stigma removal. Everyone is ‘normal’ until they suffer from life event that renders them helpless.  There is no shame in needing to be hospitalised.  Who decides what is normal anyway?

‘Everybody hates being here. People talk about killing themselves, not because they want to die but because they want to get out of the hospital’, said my friend Julie.  I have no idea on the amount of times that I have been admitted but I would say it would be over 20 times.  Some of these stays have been for a month at a time.  Not once have I seen a patient express these words.

I do wonder if they have been twisted. It was a common thread amongst depressed patients that they just wanted to get ‘so that they could kill themselves’ and so the hospital kept them in. It was not the hospital itself causing these thoughts, but the depression. They were already suicidal before coming into hospital and saw the people who were trying to help them as one more road block to their desire to be gone from this world.

The author of this article has no medical training, and yet commented on the medications that her friend was allowed to take.  The Drs and Nurses in a psychiatric facility want things to run as smoothly as possible.  They are not there to make your life difficult (even though it may seem like it when you are being admitted) but to keep you and the other patients safe.  They will give you the medication that will fit your medical needs. Just because one med worked for another, does not mean that it will work for you.

This whole article just did not sit right with me, especially being from the friend of a friend in a psychiatric facility’s perspective.  She was an outsider looking in.  She had no idea the issues that the other women were facing, or why they looked scared and unsure.

It can be pretty daunting to go into a strange place, even without suffering a mental illness. Add to the mix anxiety and you are bound to get a few people who look like a deer caught in headlights.  It may have come across more realistic if the friend had written it.  Seeing a glimpse of a ward, during visiting hours is not the same as staying in the ward.

The article has really done nothing to help the stigma that people feel about the ‘looney bin’.  It saddens me that in 2013, we are still facing such close minded views. Views of those people who are looking from the outside, and get to go home to their cookie cutter life at the end of the day, not realising the damage that their words have done.

7 thoughts on “Generalisations Can be Harmful to Stigma”