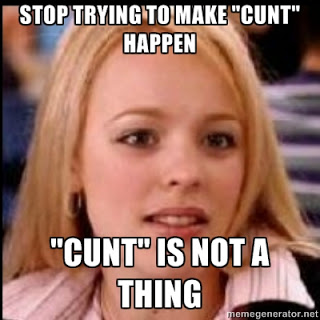 The trouble with being on social media is that you see every single bandwagon there is to be jumped on.  I admit to jumping on a few, when they interest me or are something that I feel strongly about. What I don’t like is being persecuted because I don’t want in on the joy ride.  I chose what I want to be outraged about, I don’t need your opinion forced on me.
The latest outrage, if my twitter feed is anything to go by, seems to be the word Cunt. Apparently as women we need to start reclaiming this word.  In simple terms the word cunt is used as a derogatory term for the female anatomy. So a feminist movement has started, saying that we need to reclaim this word from the men.  What if we never lost it in the first place?
It’s a word, a word has as much power as you give it.  It may seem simple, but it’s true.  If I call you a cunt, chances are that I kinda like you.  If I want to insult you I’m usually a little more inventive.  It’s not really a socially acceptable word, so if I feel comfortable enough around you to use it, then chances are I count you as one of inner posse.
I very rarely use the word Cunt as a derogatory term.  When I do, I’m usually talking about a bloke and I’m not calling him a giant vagina.  My meaning is that well, he’s really not a person that is worth my time. Just like reclaiming this word.  I’ve never lost it.  I just don’t give it the power that other women do.  Cunt is certainly not the worst thing I have been called, far from it.  Maybe though that is because well I just don’t see the badness of it anymore.
When I was a teenager I hated the word, thought it was vile.  Now? I just use it as an extra swearing describing word.  It kind of makes conversations seem a little more exciting. To me anyway.  The sentence ‘The person was a little bit naughty so he needs to go over there, away from me’, just doesn’t sound the same without all of the describing words. 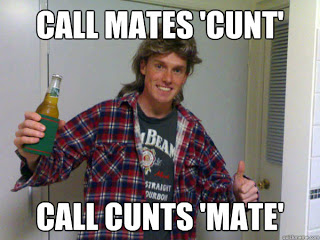 So I won’t be reclaiming the word in the name of feminism or any other cause because well I don’t give the word the power that others do.  To me it’s just another word.
What are your thoughts on the word cunt? Hate it, love it, or really couldn’t care less?

One thought on “You can keep your bandwagon”