This year I managed to sweet (ha!) talk Major Man into being a bit more organised with the grand babies Christmas presents and put a layby on so we aren’t forking out hundreds of dollars just before Christmas. Also because I am the one who has the honour of doing the Christmas shopping and the sooner I get it over with the better.
It took me an hour to get it all done.  Major Man always buys the grand babies clothes.  I spent almost half of that time looking for something for his 7 year old grand daughter.  Why you ask? It’s because apparently all girls like to dress like they are prostitutes…regardless of their age.
Exhibit A: 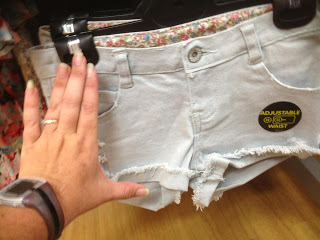 These are GIRLS size 8 shorts.  The legs aren’t even as long as my hand….and yes that is the fork you can see sticking up at the front because the legs are so short.
I’ve written about the over sell of sex to young girls before yet it still doesn’t cease to amaze me.  Anyone with kids knows that sometimes it feels like a blink and you’ll miss it experience when it comes to children growing up.  Why is it then that we are having these images and ‘ideals’ shoved down our throats about what our girls should be wearing from a young age.  There’s plenty of time for them to grow up and dress like a prostitute if that’s what they desire.
The thing that possibly worries me most? That these young girls parents are buying this stuff for them.  Retail outlets work on a demand process…if no one buys it, then they don’t sell it.  What kind of messages are we sending our young girls when we say it’s alright for a 7 year old to dress like an adult?